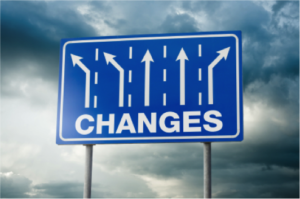 Kathy and I drove out to North Bend to have dinner with our friend Bill from Chicago tonight.  We ate at the NB Bar & Grill.  Nice place.  But the company was exceptional.  We talked  for a long time, catching up about our lives, families, work, etc.  Always a grand time.

Then, on the way home Kathy and I were listening to the radio which is not always a clear signal out near the mountains like that.  Fairly annoying.  That and the road noise made it hard to tell what song was on without turning the volume up pretty loudly, then we couldn’t hear each other talk.  Not the best trade off.

I asked what I should blog about tonight, and I suddenly recognized the song that was just starting: David Bowie — Changes.  And with that, I knew what this blog post was going to be about.

My writing career is constantly in flux.  It took me a long damned time to sell my first short story, and I still don’t sell them very frequently.  Shorts are hard stuff and I truly admire those who can pull them off.

When I signed with Tor in 2008, I was super excited and thought I was on the road to glory.  Then they dropped me in 2013, a year after the third book came out, a year after they were obligated to make a decision, because my amazing editor was trying to get the sales numbers to justify a new contract.

But, alas, publishing is about counting magic beans, and even though I had no publicist at all for book two, they cut the print run in half, and gave it a significantly narrower distribution, the sales were weaker.  Go figure.

Fast forward to today.  Book 4 in the Sarah Beauhall series came out on April 11th, 2016, three years after Tor dropped the series and four years after I’d written it and the next book as well.  I have a brand new publisher out of Denver and so far the comments and fan response has been rewarding.  I have no idea if the book is going to sell well, but it’s out in the world and that’s the most important thing to me.

See, I’m reinventing myself.  You have to do that many times in your life, go through “Changes” as David Bowie sings about.  Turning to face myself proved to be a far harder task than I ever imagined.  Now I think how we’ve lost so many amazing artists in the last couple of years and how many of them lived their lives the way they wanted to.  Bowie and Prince come to mind, of course.  But here I am, fifty-one years old and trying to figure out what’s next for me in the writing world.

One of the things I’ve come to realize is that there is no road.  There are a thousand roads.  There is no map, all roads are equally passable with the right attitude and perseverance.   That whole thing about when one door closes another door opens is a very old and0tired platitude we tell each other to help when people are discouraged, but the truth is: when one door closes you’d be smart to look around and realize that there are more doors than you can open, and that change is what is keeping you down.  Fear of change.

I started the Cleric Journal because I was bored with not writing.  I was tired of letting the fact Tor turned down the next Sarah book define who I am as a writer.  I was tired of feeling like I’m a failure when the game is so rigged against anyone being successful that the only thing to do is to shut the fuck up and write the next thing.

Because you can only control your quality and your output.  That’s it.  You can try marketing if you have those chops, and the desire, but in reality you have the ability to improve your craft through study and practice.  That’s it.  Write and write some more.

And take a hand at marketing if you can figure it out.  It’s not how my brain works, but I’m a smart guy, I can learn new things.  But I fear change, so learning new things does not always come quick or easy.

On the other hand, writing tales.  That I have down cold.  Oh, I need to continually work on quality, but output — I’ve got that in spades.

As of  4/26 I’ve written over 257k words in the Cleric Journal saga.  I just completed book four in the tale that will go on for a while yet.  I’ll take the next few days and figure out what book 5 is all about, and do some blogging here to keep you entertained, but I’m pushing through.

Book 1 of the Cleric Journal is off to NY with my agent.  I’m hoping she can find a home for the series.  That would rock.  But if she doesn’t, I’ll go indy publishing with it.  Hell, I may end up indy publishing them in any case, but I want to see how NY handles this.  I’m a firm believer in “psychotic persistence” so I can’t help but hold out hope that something will break here.  In the meantime, I’m off to watch an episode of West Wing and head to slumberland.  Tomorrow is another big day.  Of course, if you play the game correctly, they are all big days.

And that song keeps looping through my head.